We offer a range of lighting controls from simple PIR’s (Passive Infra-Red detectors) and Microwave Presence Detectors (aka Radar Controls) to full DMX512 (Digital MultipleX) scene setting for theatres; other smaller LED installations for commercial or residential applications can be designed using DMX128 to keep costs down.

Domestic installations using LED should only employ trailing edge dimming to avoid phase cutting dimming control issues such as flicker and circuit incompatibility. Most domestic dimmers are resistive or inductive and should be checked for product compatibility prior to installation.
We also supply warm dimming downlights which change colour temperature as they are dimmed down. These replicate the effect of dimming tungsten filament lamps (aka normal incandescent light bulbs) by making the light warmer and redder as the light output reduces – perfect for a cosy night in! 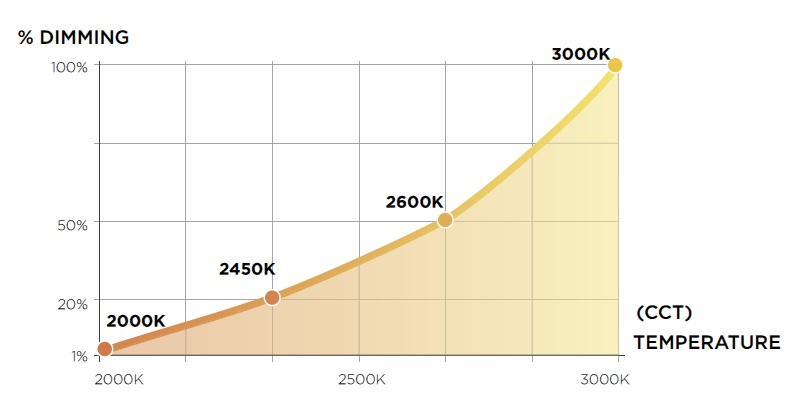 Warm dimming technology offers a regulation curve equivalent to the one in an incandescent source.

Retro-fit LED lamps (LED bulbs that are replaceable and operate on 220 ~ 240V supply) have a very poor power factor. This means that on a 3 phase power supply, a 10W rated lamp with a Power Factor of 0.2 will actually cost the client 5 times more to operate than the rating would suggest!

Dimming Protocols
a) Analogue Dimming
Across the majority of the globe, the standard analogue bus signal dimming is operated between 1 (one) and 10 (ten) Volts and is known as 1-10V dimming; the US uses a slightly different standard between 0 (zero) and 10 (ten) Volts and this is known as 0-10V dimming. The installation of such a system requires the normal mains power cables plus a ‘dimming pair’. The dimming pair is a pair of cables that are connected between the dimmer controls and the luminaire control gear. This protocol is reliable and is not as subject to as many interference issues as most digital dimming systems.
(Warning – using 1-10V controls with 0-10V fittings and vice-versa will cause luminaire control issues when in a reduced power state; the luminaires may not be turned off through dimming control!)

b) Digitally Addressable Lighting Interface (DALI)
DALI is a recognised standard across all forms of building controls, not just lighting. It can be used to control luminaire outputs (full power, dimmed state, off, etc) but it can also be used to report the status of the fitting, how long the ballasts have been used for, if there any heat issues, lamp failures, etc. There is a predefined string of code that must be adhered to at the front end of the protocol but, unfortunately, there is a final string that can be customised for individual manufacturer purposes; this can lead to incompatibility issues and undesired effects.

DALI is mainly used on large installation where one lighting company manufactures and supplies all the lighting and controls, Philips created the system in 1984 in an attempt to license commercial dimming controls. Luminaires can be individually or group controlled via a set of commands issued via a bus cable (a shielded pair of cables that carries signals from the controller to the luminaire gear). It will require commissioning prior to handover and again throughout the life of the installation if luminaires are damaged / replaced.

c) Digital Serial Interface (DSI)
DSI was originally conceived by Tridonic in 1991 to combat the DALI innovation from Philips. Tridonic are a global lighting gear manufacturer and part of the Zumtobel Group of Companies which owns Zumtobel, Tridon and Thorn Lighting. The signals are sent from the DSI controllers down a ‘dimming pair’ to the luminaires which can be controlled in groups. There are many manufacturers who provide controllers for DSI and the simplicity of the protocol reduces incompatibility issues and makes for an easier installation; depending on experience of the installer, commissioning may not be required prior to handover. Replaced luminaires will not require commissioning post replacement.

d) Digital MultipleX (DMX)
Developed by the Engineering Commission of United States Institute for Theatre Technology (USITT), DMX512 uses a 3 cable communication system; DMX+, Ground, DMX-. The controllers and luminaires form an addressed network which must have a network termination after the final luminaire (some newer luminaires automatically self terminate post calibration) in order for the DMX signal to be maintained. each addressed luminaire can be placed into several groups and can be dimmed as well as controlling colour temperature or change of colour using RGB, RGBW and other such multi-die luminaires will allow.

The Lumen Architect will not supply a DMX system without also supplying the controller: some imported DMX controllers are not built to the USITT standard. We supply Nicolaudie controllers by default for domestic installations and GDS controllers for theatres.

This website uses cookies to improve your experience. If you continue to use this site, you agree with it.